WASHINGTON — President Trump has blamed many others for his administration’s flawed response to the coronavirus: China, governors, the Obama administration, the World Health Organization. In recent weeks, he has also faulted the information he received from an obscure analyst who delivers his intelligence briefings.

Mr. Trump has insisted that the intelligence agencies gave him inadequate warnings about the threat of the virus, describing it as “not a big deal.” Intelligence officials have publicly backed him, acknowledging that Beth Sanner, the analyst who regularly briefs the president, underplayed the dangers when she first mentioned the virus to him on Jan. 23.

But in blaming Ms. Sanner, a C.I.A. analyst with three decades of experience, Mr. Trump ignored a host of warnings he received around that time from higher-ranking officials, epidemiologists, scientists, biodefense officials, other national security aides and the news media about the virus’s growing threat. Mr. Trump’s own health secretary had alerted him five days earlier to the potential seriousness of the virus.

By the time of the Jan. 23 intelligence briefing, many government officials were already alarmed by the signs of a crisis in China, where the virus first broke out, and of a world on the brink of disaster. Within days, other national security warnings prompted the Trump administration to restrict travel from China. But the United States lost its chance to more effectively mitigate the coronavirus in the following weeks when Mr. Trump balked at further measures that might have slowed its spread.

Mr. Trump has not mentioned Ms. Sanner by name when faulting her Jan. 23 briefing. But by focusing on a single briefing, some former officials said, his criticism seemed both personal and misplaced.

“It’s hard for me to imagine her saying something like ‘not so deadly,’” said Greg Treverton, a former National Intelligence Council chairman who worked with Ms. Sanner. “But it is conceivable that is what Trump heard and it wasn’t exactly said.”

Mr. Trump, who has mounted a yearslong attack on the intelligence agencies, is particularly difficult to brief on critical national security matters, according to interviews with 10 current and former intelligence officials familiar with his intelligence briefings.

The president veers off on tangents and getting him back on topic is difficult, they said. He has a short attention span and rarely, if ever, reads intelligence reports, relying instead on conservative media and his friends for information. He is unashamed to interrupt intelligence officers and riff based on tips or gossip he hears from the former casino magnate Steve Wynn, the retired golfer Gary Player or Christopher Ruddy, the conservative media executive.

Mr. Trump rarely absorbs information that he disagrees with or that runs counter to his worldview, the officials said. Briefing him has been so great a challenge compared with his predecessors that the intelligence agencies have hired outside consultants to study how better to present information to him.

Working to keep Mr. Trump’s interest exhausted and burned out his first briefer, Ted Gistaro, two former officials said. Mr. Gistaro did not always know what to expect and would sometimes have to brief an erratic and angry president upset over news reports, the officials said.

Richard Grenell, the acting director of national intelligence, said that the idea that Mr. Trump was difficult in intelligence briefings was “flat wrong.” “When you are there, you see a president questioning the assumptions and using the opportunity to broaden the discussion to include real-world perspectives,” Mr. Grenell said.

White House officials disputed the characterization of Mr. Trump as inattentive. “The president is laser-focused on the issues at hand and asks probing questions throughout the briefings — it reminds me of appearing before a well-prepared appellate judge and defending the case,” Robert C. O’Brien, the national security adviser, said in response to a request for comment. 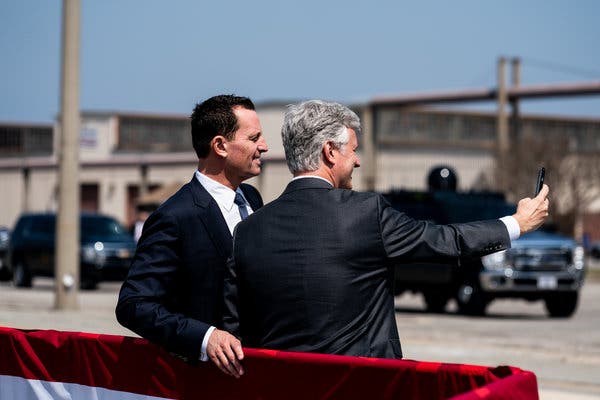 An official with the Office of the Director of National Intelligence declined to make Ms. Sanner available for an interview, citing the sensitive nature of her work.

Mr. Trump has long harbored a suspicion of the intelligence agencies, viewing them as part of the so-called deep state intent on undermining his victory in 2016 by revealing that Russia developed a preference for his campaign as it interfered in the election. His distrust has persisted; he publicly belittled his intelligence chiefs last year after a congressional hearing where they offered assessments at odds with the White House, directing them to “go back to school.”

Other presidents have had, at times, contentious relationships with their intelligence briefers. But unlike George W. Bush, who questioned assumptions underlying the analysis, or Barack Obama, who cited analysis from deep in his written briefing, Mr. Trump does not appear to read the document or to otherwise prepare beyond bringing in information he picked up from personal sources.

“How do you know?” is Mr. Trump’s common refrain during his 30- to 50-minute briefings two or three times a week. He counters with his own statistics on issues where he has strong views, like trade or NATO. Directly challenging him, even when his numbers are wrong, appears to erode Mr. Trump’s trust, according to former officials, and ultimately he stops listening.

H.R. McMaster, the former national security adviser, would sometimes interject during intelligence briefings to correct Mr. Trump, but the president would ignore him. The corrections contributed to the president’s growing irritation with Mr. McMaster, according to people familiar with the briefings. Mr. McMaster, who was replaced in 2018 after 13 months in the post, declined to comment.

Think of Mr. Trump as a performer who is always on, even in the confines of a classified briefing, Joseph Maguire, the former acting director of national intelligence, has advised other officials. Mr. Maguire has told briefers they need to know their audience and understand that Mr. Trump honed his style on reality television, said a former senior intelligence official. Mr. Maguire declined to comment.

Intelligence briefings are among the most important entries on a president’s calendar. The briefer, always a top C.I.A. analyst, delivers the latest secrets and best insights from the 17 intelligence agencies. The oral briefings to Mr. Trump are based on the President’s Daily Brief, the crown jewels of intelligence reports, which draws from spywork to make sophisticated analytic predictions about longstanding adversaries, unfolding plots and emerging crises around the world.

But getting Mr. Trump to remember information, even if he seems to be listening, can be all but impossible, especially if it runs counter to his worldview, former officials said.

When Ms. Sanner replaced Mr. Gistaro in 2019, she tried a new approach. She gives Mr. Trump an agenda to try to keep him on track and deploys a more analytical style than the just-the-facts delivery of Mr. Gistaro.

Over her career, Ms. Sanner, 56, has directed the agency’s training program for new analysts, overseen the assembly of the most sensitive intelligence reports and has expertise in Central Europe, Russia and Southeast Asia. She relies on humor and sarcasm to get her point across and will subtly challenge the president.

If Mr. Trump diverges onto irrelevant topics, she will let him talk before interrupting to confidently ask to move on, said people who have seen Ms. Sanner brief the president. 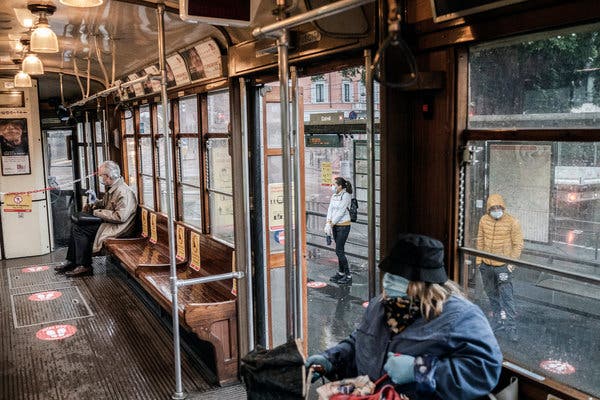 Mr. Trump, who made his name in real estate, is drawn to subjects like international economic developments. Ms. Sanner highlights that material and tells the president what is in the intelligence for him, according to people familiar with her briefing style. She draws from recent intelligence reports, or that day’s edition of the President’s Daily Brief, to lay out a compelling story around a new piece of intelligence. The technique is effective, according to associates of Ms. Sanner.

Mr. Trump has also shown interest in foreign leaders, particularly autocrats like President Abdel Fattah el-Sisi of Egypt, and Ms. Sanner mentions them to draw in the president on topics that he might otherwise tune out.

While Mr. Trump does not appear to read the intelligence reports he is given, he will examine graphs, charts and tables. Satellite pictures clearly interest him, too: He tweeted one from his intelligence brief, revealing the capabilities of some of the government’s most classified spy assets.

At the start of Mr. Trump’s tenure, any discussion of Russia could upend the briefing, devolving into complaints by the president that he was unfairly being attacked in the press over Moscow’s election interference campaign.

“There was some venting, which at times made me a little bit frustrated,” Dan Coats, the former director of national intelligence, told congressional investigators. “I thought it was taking away from him getting the intelligence he needed.”

Ms. Sanner mostly sidesteps the risk by broadly covering election threats not just from Russia but also from China, North Korea and Iran.

White House aides have also limited the number of people who attend the intelligence briefings, in part to limit leaks and to restrict the sessions to senior officials that the president is comfortable with, former officials said. Ms. Sanner leads the discussion, and is accompanied most days by Mr. Grenell and often by Gina Haspel, the C.I.A. director. Typically, Mr. O’Brien and the White House chief of staff sit in. 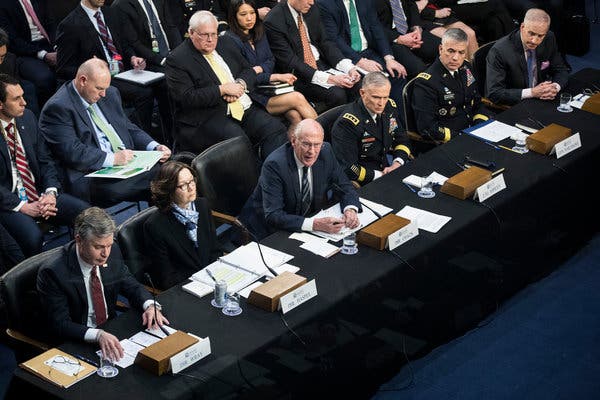 Ms. Sanner has cultivated a close relationship with Mr. Trump and has displayed respect for him, former officials said, so some of them were surprised when he and intelligence officials pinned blame for the administration’s coronavirus response on one of her briefings.

Ms. Sanner did offer limited information in that briefing, an official said, and she compared the virus to SARS, a less contagious coronavirus from China that was more quickly contained. Former officials defended her, saying that the comparison served to help the president understand the threat.

By February, the intelligence agency warnings were more in line with the increasingly dire predictions of the National Security Council staff and the public health officials. But unlike his aggressive move in January barring travel from China, Mr. Trump later hesitated to act, ignoring increasingly strident warnings from officials who pressed for stronger steps as the threat became clear.

An earlier version of this article misstated when Beth Sanner replaced Ted Gistaro as the analyst who delivers President Trump’s intelligence briefing. She started the job in 2019, not April 2017.

Julian E. Barnes is a national security reporter based in Washington, covering the intelligence agencies. Before joining The Times in 2018, he wrote about security matters for The Wall Street Journal. @julianbarnes • Facebook

Adam Goldman reports on the F.B.I. from Washington and is a two-time Pulitzer Prize winner. @adamgoldmanNY