John Bolton said Sunday that the United States will follow the “Libya model” as it prepares for talks on denuclearizing North Korea.

That will probably be less than reassuring to Pyongyang’s leader Kim Jong Un, who likely is only too aware that Washington launched a military operation that led to the overthrow of the North African nation’s president, Moammar Gadhafi, in 2011.

He made similar comments on Fox News Sunday.

Bolton was referring to Gadhafi’s promise in 2003 to give in to Western demands and abandon his pursuit of nuclear weapons.

What he failed to mention was that Gadhafi’s concessions did not prevent the United States and NATO from invading the country in 2011, ultimately resulting in the leader’s death at the hands of NATO-backed rebels.

North Korean leader Kim Jong Un is likely keenly aware of the meaning behind such comparisons. That may be why Kim told South Korean president Moon Jae-in during their meeting earlier this weekend that he would abandon the country’s nuclear aspirations if the United States promised not to invade the country, as The New York Times reported on Sunday.

“[T]hink of message this sends to Kim Jong-un: US ended up attacking Libya leading to Qaddafi’s slaying!” Shibley Telhami, professor of government and politics at the University of Maryland Department, said on Twitter. 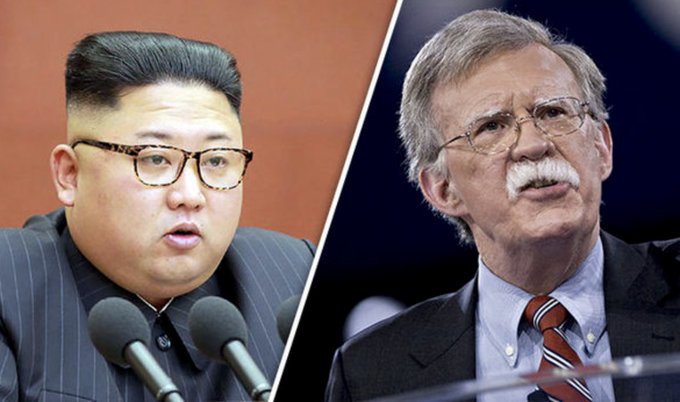 Bolton says on @FaceTheNation “we are looking at the Libya model” for nuclear disarmament for North Korea. Libya had a very rudimentary program (little leverage). More relevant, think of message this sends to Kim Jong-un: US ended up attacking Libya leading to Qaddafi’s slaying!