A very good question indeed. Here is one ‘student- of- this- subjects’s’ take on this.

Trump’s approval rating in the GOP is 89%. I’ve seen many Democrats say that he has high support because the GOP is shrinking. What polls do they use to support their claim?

The most common one cited (because of its longevity and consistency) is Gallup’s party affiliation survey: 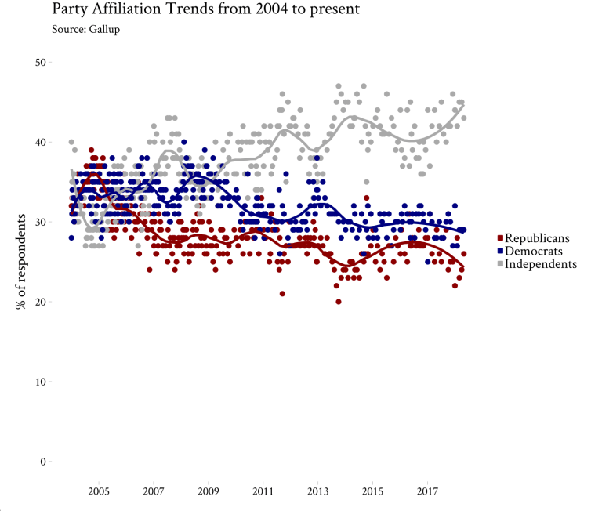 But when you take those self-described Independents’ partisan preferences into account, you don’t see a really major shift.

Related reading: Gabriel Guzman‘s answer to Independents are now the largest political bloc at 44%. How will this affect the short and long term future of the Democratic and Republican parties?

However, what Democrats and political forecasters are really looking at when saying that the Republican Party is “shrinking” are the demographics of the parties’ composition.

The Republican Party has a lock on rural, white-majority working class areas and older voters generally, but the long-term prospects of those electorates aren’t great. America is diversifying, becoming more educated, ever-moving into cities and suburbs, and the older, conservative generations will be replaced by liberal ones.

Now, prognosticators erred in thinking that these forces were going to come together in 2016 (eg, “The Old White Man’s Last Hurrah (TIME, 2016)”); but unless there’s a significant demographic realignment in the parties – and in the Republican Party specifically – they’re not wrong. (They were also caught off-guard by a reversal in minority voter turnout in 2016).

So even if you can kinda-sorta point to long-term measures of voter identification, it’s not really any particular poll that Democrats and others cite to say that the Republican Party is shrinking, but long-term demographic trends on top of their voting behavior.