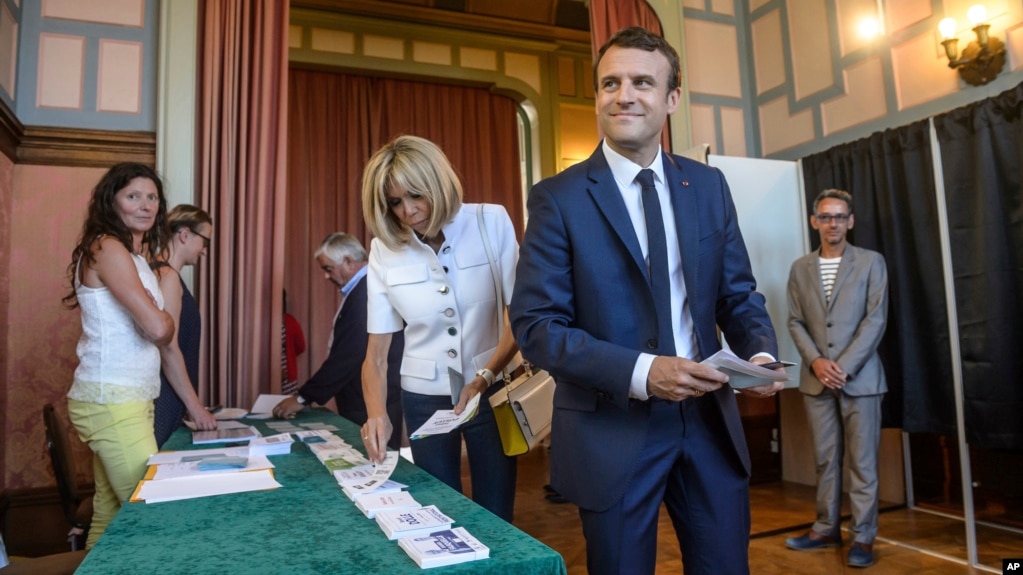 French President Emmanuel Macron and his wife Brigitte Macron pick up ballots before voting in the first round of the two-stage legislative elections in Le Touquet, northern France, June 11, 2017.

PARIS — The fledgling party of France’s new centrist president Emmanuel Macron is set for a landslide victory in parliamentary elections, as results from Sunday’s first round of voting showed it taking 28 percent of the vote.

That result for La République en Marche and its ally MoDem, which had 4 percent of the vote, puts the pair within reach of an overwhelming majority in the National Assembly with more than 400 seats in the 577-seat lower house if their success carries through a final round of voting next week.

Voter turnout, however, hit a record low, as an estimated 52 percent of the population stayed away. That’s being blamed on voter fatigue, after a long and divisive presidential campaign that saw Macron elected last month.

Macron’s spokesman Christophe Castaner called the low turnout “a failure of this election”.

“We have to take note, we have to restore trust,” Castaner, who is also minister for parliamentary relations, told France 2 television.

Still, the result is seen as a strong endorsement of President Macron. Many of those who voted for him in the presidential election, particularly left-wing voters, said they were doing so only to keep Marine Le Pen out. At the time, many of them, and those who abstained, promised to vote against the new president in the parliamentary elections. However, it is clear that a large percentage of them changed their minds.

In the 28 days since his inauguration, Macron has made his mark on the international stage: playing President Donald Trump at his own handshake game and winning; criticizing Russia’s Vladimir Putin while standing beside him; and jumping in with new proposals after the U.S. announced a U-turn on climate change. 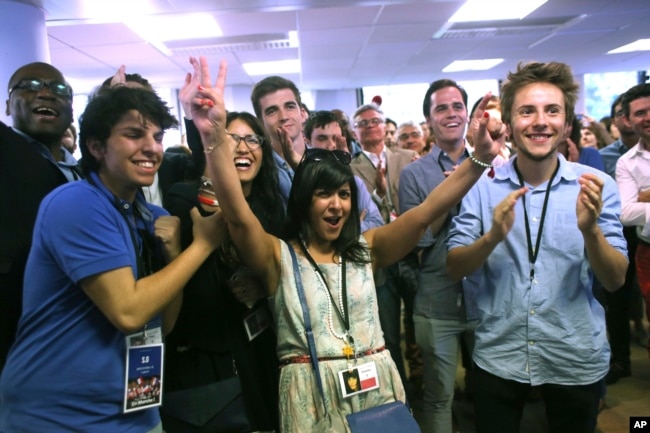 That has had an effect at home. After five years of Socialist Party rule, in which former president Francois Hollande failed to meet his objectives of reducing unemployment and giving a boost to the flagging economy, the French were depressed and downbeat.

Seeing the new president widely acclaimed and admired on the international stage has made voters at home sit up and take note — and decide to give him a chance.

The president needs a strong majority in order to push through his promised reforms of France’s strict labor laws, and its ailing social security system.

Prime Minister Edouard Philippe said the result is a clear signal that the French support Macron’s plans. “France is back,” he said, noting that the president, in his first month in office, “has embodied trust, willingness and audacity.”

He continued: “Next Sunday, the National Assembly will embody the new face of our republic: a strong republic, a unified republic, a republic that listens to everyone, the French Republic.”

LREM, formed just a year ago to get Macron elected, fielded an unprecedented number of unknown candidates. Most had never held elected office and just five percent were outgoing parliamentarians. The few non-politicians who were known to the public included a woman who used to be a bullfighter, a former anti-corruption judge and a video game magnate.

“It is neither healthy nor desirable for a president who gathered only 24 percent of the vote in the first round of the presidentials and who was elected in the second round only by the rejection of the extreme right should benefit from a monopoly of national representation,” said Socialist Party leader Jean-Christophe Cambadelis as results flowed in. 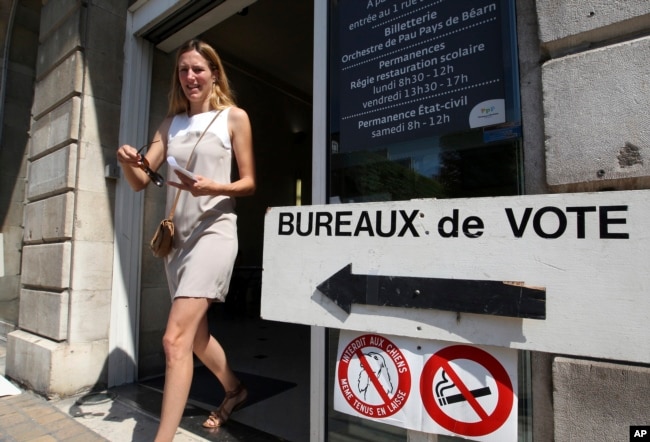 A woman leaves a polling station in the first round of parliamentary elections in Pau, southwestern France, June 11, 2017.

Cambadelis later confirmed he had been eliminated from the competition for his Paris seat, one that was previously a safe one for the Socialists.

It had been expected that the conservative Les Republicains (The Republicans) would be mobilized to form the largest bloc in the National Assembly. But Macron’s impressive performance in his first month, coupled with astute moves, including naming an LR deputy as prime minister, took the wind from their sails. The party is still expected to form the second largest bloc, with a predicted 95-125 seats.

The big losers in this first round were the Socialists, with less than 10 percent of the vote. That would give the PS and its allies just 10-25 seats in the new Assembly.

A second round of voting takes place next Sunday. Prime Minister Philippe urged French voters to improve on Sunday’s turnout, stressing the importance of going out to vote.