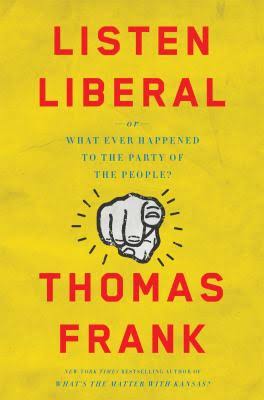 listen to an interview with him on the book at http://www.wnyc.org/story/democratic-party-still-peoples-party/, post and book and link suggested by blog contributor Prof Arthur Lerman of Mercy College

Thomas Frank, who we featured many posts ago as the author of THE WRECKING CREW, a frontal assault on the Republican and Conservative dismantling of much of the liberal infrastructure in Ideas, Politics, and Government Policy Programs starting in the Reagan years, has come out with a new book.

It is LISTEN, LIBERAL!, an equally pointed, though less damning, skewering of how the Democratic Party– post-Johnson, post-Carter– has been increasingly identified with Big Money, meritocracy (rule of a professional elite, privileged, though often from less privileged origins). This meritocracy and need to depend on big donors, banks, “High Finance,” etc., does not sufficiently have the interests of the hard pressed middle class, lower middle class, working class, poor, in mind. Ditto unions.

He surely does not equate the sins of Democrats with those of Republicans, but he does achieve a sort of balance by shaking up their privileged position, and their shared responsibility for the flaws of Free Trade, “welfare reform,” rampant prison building, etc. He does say some good intentions morphing into Untended Consequences, many dire for, especially, the bottom 60% (well over 200 million people!) of the population economically/numerically.

The Democrats would be well advised, and this is a good year to do it as the Republican train-wreck finally unfolds, go consider these charges by Frank. One would hope that if Hillary Clinton is the Democratic nominee (super-likely) and she is being “educated” or “reeducated” by her opponent Sen. Bernard Sanders, and non-candidate influential like Sen. Warren and former Labor Secretary Robert Reich, she will also give this book a close read. Let’s send her a copy just to make sure.

A flaw I’ve detected in the Frank book, not big, but not small either, is his seeming belief in the power of individual politicians to ignore their “times, the public mood, the Zeitgeist, the fact that they sit on top of an evolving structure that conditions their need to respond to Money, the need to have plenty of it to win. Still this does not excuse the elitism and freq1uent tone-deafness  to large numbers of voters– some lured by Trump– who are being evicted, figuring out the well intended Affordable [Health]Care Act, struggling with the long term flatness of wages and declining benefits.